Remember awhile ago when we made bacon blue cheese meatballs for a choir party and they were devoured in the NAME OF THE LORD (we live in the south, let it go) with lots of wine?

This is the same recipe.

But. You make them bigger, which is better, and you eat ’em on a bun.

So, this obviously isn’t rocket science.  Here’s the original post, if you’re interested.  I actually had leftovers from a different time I made the meatballs, so my burgers included bread crumbs and egg, just like meatballs, which we loved.  You could omit those two things if you’d like, though!

Here’s the original recipe, adapted for 4 burgers, if you were too lazy to click the link above.  Couch potato.

Like I said, leave out the breadcrumbs and egg if you’d like – I’ll never know!  Because of the cheese and bacon, I grilled these on a skillet indoors to medium-well, because the thought of rare bacon wasn’t the most appetizing thing to me.  It definitely won’t hurt you, though, so cook these however you’d like!

The pan vs. grill option came from the fact that 1. our grill has rusted to the point of death, the cheese/bacon aspect of the burgers makes them a little hard to control.  Again, though, cook them however you’d like!

I served these so simply with lettuce and onion – Jay added ketchup to his, but you really don’t need anything else since the bacon and cheese are IN THE DANG BURGER. Golly.  I might make these tonight, before I have 8 hours of yoga tomorrow.  Genius idea, huh? This is another Weekend Potluck submission – I’ve been reading new recipes from this fun community nonstop, and I’m so excited to have found Tonya and her family over at 4LittleFergusons.  She, Marsha, Kim&Julie, Holly, Brandie, and Tabitha all have this fun roundup of recipes each Friday – there are some great ideas for what you might make at some point this weekend!

Click the picture below to go to the full potluck page – let them know if you try anything mind-blowing! 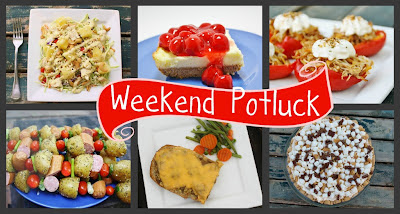