When we went to Asheville last weekend to visit our friends Katie and Tony for Jay’s 5K (that’s a lot of information), we had all these great intentions of making food at their house, not eating or spending too much, you know.  Best laid plans. 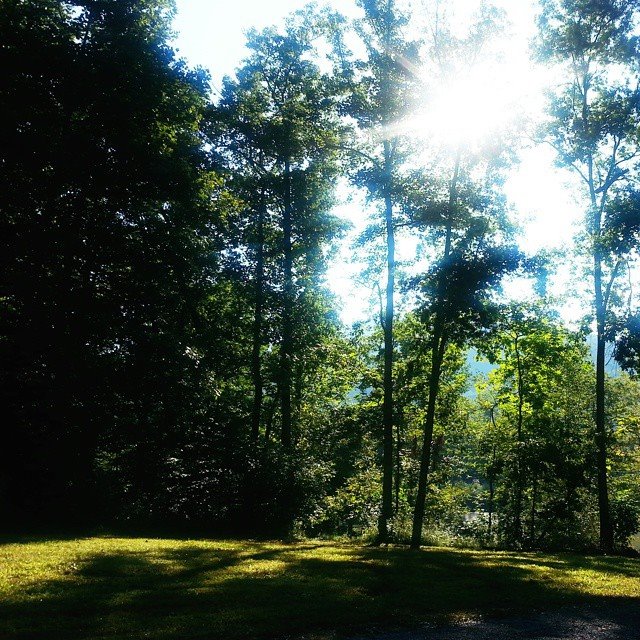 UNTIL WE REALIZED WE WERE IN ASHEVILLE, home of some of our very favorite restaurants, and so we said eff it and went to 4 restaurants in 2 days.  Whatever.

On Friday night we arrived late and Katie had made veggie burritos, which were delicious because they included homemade guac and just YES.  I don’t make guac a ton because I’m alllll about make-ahead anything, and guac turns brown in approximately five seconds.  So.  I eat avocados sliced on things and let other people be in charge of the guac.  It works for me.

On Saturday, we got to WORK on our eat-all-the-things plan.  For lunch after the race we hit up 12 Bones BBQ, which is apparently famous because the president went there when he was campaigning and also because every single thing is delicious!  For serious.  The sides are all fresh and the sauces are really cool and unique.  Every day there are different flavors of ribs; we got a blueberry chipotle glazed rib on the side of our already-massive meal and it was deeeelish.  We went to the River Store, which apparently isn’t quite as crowded as the other location.  The atmosphere is sliiiightly nicer than some divey bbq places around these parts, and there is tons of outside and inside seating.  Obsessed. THEN, we went back to Katie and Tony’s to take a nap because we had each consumed 12 pounds of food and needed to rest before dinner.  Natch.  We went to Ben’s Tune Up, a relatively new place, for drinks and appetizers.  See how natural this picture is that I made everyone adjust their hands just so for?  The food is kind of Asian-Fusion, and we had the hummus and dumplings.  I had sake, made in house, and it was delicious!  They have great beers on tap too.  Another super cool location, almost all of the Ben’s seating is outside and there are flower boxes and trees throughout the patio area.  The prices here were a teensy bit high for what we were getting, but the atmosphere made up for it. Then, because we convinced ourselves we hadn’t eaten enough yet that weekend, we went to Asheville Brewing Company for pizza and beer.  Football was happening, and this place had TVs, so it worked for our purposes.  Unfortunately, the pizza was just meh, and we all kind of agreed that this was our least fav place of the weekend.  There wasn’t anything wrong with it, but I did find the clientele to be a little bit … varied.  Screaming babies next to drunk screaming football fans all kind of crowded together in what can only be described as a not-nice place.  The food was ok and we tried a beer that we really liked, but with all the other spectacular offerings in the city, I don’t know if we’ll go back.  Sorry, ABC. On Sunday, we had time for one last meal before we left, so we went to Mela, an Indian place, for their lunch buffet.  HOLY MY FAVORITE THING EVER.  I’m a sucker for an Indian buffet, but this was seriously ridiculous.  First, Mela is gorgeous inside.  High ceilings, great colors and decorations without being gaudy, really pretty bar area.  The buffet was delicious, mostly vegetarian, and consisted of approximately 84 condiments, which is one of the best parts of good Indian food, doncha think?  There was some crazy spice happening in some of the dishes, and the naan was some of the best I’ve ever had.  This might be on our list of places to go every single time we’re in Asheville from now on.  For dinner, I’d say save your pennies, the regular menu was kind of pricey.  I find this to be the case at most Indian places; the buffet is a great value if you can swing a restaurant trip at lunch instead of dinner.

And then we drove home in the best food coma of our lives and Jay became a vegetarian that very evening and is still at it.