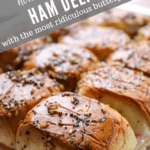 You know these little love nuggets, right? If you live in the south, I’m thinking yes, but I don’t know where else these are a STAPLE for parties, tailgating, and sportsball watching in general. Like this week, there is some kind of game on Sunday night? That might be kind of important.

I feel that it’s important to state that I do in fact know that this weekend is the Super Bowl. And here’s the next recipe you should ABSOLUTELY make for it.

So these sandwiches, just in case you aren’t familiar. It’s regular ham and cheese layered in sweet dinner rolls, then doused with a butter + spice mixture, wrapped in foil, and baked to ooey gooey perfection. Easy doesn’t begin to cover it; the hardest part of the whole recipe is melting the butter in the microwave and measuring out the spices. The sandwiches can be made well in advance and then baked at the last minute. I like to bake them in batches of 12 at a time so that they’re always hot during parties or wherever I’m serving them.

The ingredients are super simple and forgiving, too – I used leftover Christmas ham (it was appropriately close to Christmas, don’t worry) for this but deli ham works just fine, and any kind of cheese you like is great. Deli slices of cheese make everything simple because they’re pre-portioned, but they’re not necessary either. The seasoning blend is what really takes these over the top: butter, seasoned salt, poppy seeds, sesame seeds, dehydrated onion, and Worcestershire sauce. Then the sandwiches are made with sweet dinner rolls, any kind you can find, ham, and sliced cheese. Start by melting the butter mixture in the microwave for 30 seconds, then stirring and repeating as needed until the mixture is melted and the spices combine with the butter. Then, separate the rolls from each other and cut them in half if they aren’t already. Keep the rolls in the same configuration they were in in the package; we put them back together in the same shape in a minute. Start to build the sandwiches by placing 1/2 piece of cheese (folded in half) and a slice or two of ham on each of the bun bottoms. AND THEN, brush the spice butter mixture over the sandwiches. On the tops, in the cracks between, wherever you can get it so it doesn’t run off in the pan. Cover the sandwiches tightly with foil, then when you are ready to serve bake these at 350F covered for 15 minutes and uncovered for 5 minutes more to crisp the tops of the buns just a teeny bit. ….and boom goes the dynamite. I can’t tell you how delicious they are, in all their comfort food simplicity. The butter mixture is out of this world and the ham + cheese pairs so well with the sweet bread. I love these for tailgating (if you have a way to keep things warm), birthday parties, and DEFINITELY for this weekend. Your team winning probably depends on it. Called Ham Delights in some circles, these teeny sandwiches are pure love and goodness, great for make-ahead, and adored by kids and adults!