Oh, early week dinners. They can sometimes feel sad. Maybe we’re trying to do better by our bodies after a weekend, maybe we’re hurried with work and activities and life, maybe we’re just out of inspiration and tired.

Easiest ever eggplant parm to the rescue! Marinara + cheese is a pretty universally loved combination, and I make versions of this all the time: throw random veggies in with marinara and cheese, top with something crunchy, bake until tender, done.

This version with eggplant ends up almost creamy when the eggplant softens because we slice it with a mandoline. If you don’t have one just slice the eggplant as thinly as you can – or buy a new kitchen tool, you’ll use it a ton once you have one!

This is doubly easy if you keep marinara in jars or in your freezer – this is my favorite version, but use anything you like! Here we have parmesan, mozzarella, marinara, thinly sliced eggplant, and panko bread crumbs. FIVE INGREDIENTS TO YOUR BEST WEEKNIGHT LIFE.

Once the marinara is ready and the eggplant is sliced, grab a big baking dish (my favorite Staub is this one, it has a lid and can be used on the stovetop or in the oven. we use it at least twice per week!) and layer the dish without obsessing at all. Start with a third of the sauce, half the eggplant with a sprinkle of salt and pepper, and half the cheese.

Now, you can bake this right away or keep it in the fridge for a few days for even quicker weeknight eating action. When you do bake this, throw it in the oven at 375F for an hour or so. Start with it covered and then uncover for the last 15 minutes to brown and crisp the top just a little bit.

Obviously salad, bread, or pasta would be great with this, but honestly we eat it plain and it is just so good on it’s own – a great vegetarian balance of produce, protein from the cheese, and a little crunch on top so that we don’t feel dead inside.

Needs no more explanation. Add this to your Weeknight Rotation of Meals That Are Delicious, and enjoy! 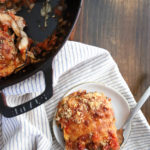 Here is my favorite homemade marinara, but use any kind you like! I often make a double batch and use some for the week ahead, freeze some, and use some in a baked dish like this.

Make ahead: This can be assembled in advance and kept in the fridge for a few days, then baked right before you want to eat it.